Edit Mode: Add or remove places and events to this , then click done editing: 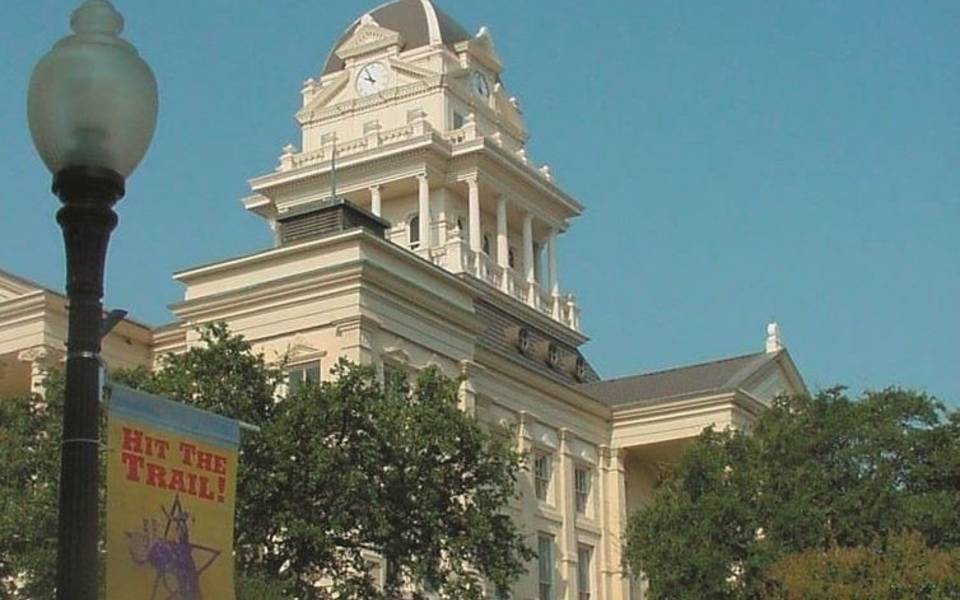 Courthouse History On November 14, 1883, the Commissioners Court of Bell County authorized the issuance of bonds and levy a tax therefore for the building of a County Courthouse.  Said issue being in the amount of $65,000.00.   The order sets forth the fact that....."several successive Grand Juries of Bell County have condemned in unmeasured terms, the present County Courthouse as an unsafe repository of the County's records.....".  Further, it was ordered that the County Judge, W.M. Minyard advertise in the Galveston News until the 31st day of December 1883 for plans and specifications for the erection of a new Courthouse in Belton.  He was ordered that the cost not exceed $65,000.00 and to be of dimensions sufficient to supply necessary Courtrooms, jury rooms, offices for all County Officers and one Justice of the Peace and ample room for all the records of the County; to be practically fire proof, and the walls of said Courthouse to be built of the best and hardest limestone found in and about Belton. On January 11, 1884, the firm of J.N. Preston and Son of Austin, Texas was employed as Architects for the building. On March 3, 1884, bids were opened by the Court and Ben D. Lee, a local builder was awarded the contract in the amount of $64,965.00. On May 29, 1885, the Architect recommended that the Courthouse be accepted and thereafter the Court issued its "Certificate of Acceptance" of such building. The present building is the third Courthouse in Bell County built on the same site.  The first such building being a two room log cabin built in 1851 soon after the creation of the County in 1850.  The second such structure was built in 1858 and torn down to make way for the third Courthouse. The Bell County Courthouse designed in the Renaissance Revival style was truly a magnificent structure in 1884.   This structure, which was built before the current state capital, is one of Texas' finest courthouses in a collection of outstanding public buildings.  However, like many of the prominent Texas courthouses, federally funded renovation projects of the 1930's and 1950's had a detrimental impact on the building.  The clock tower and much of the rich roof details were removed, the historic interior was modernized and radically altered. The present Commissioners Court began the process of a complete restoration of the Bell County Courthouse.  The restoration began in August 1998 and the interior renovation was completed in November 1999.  The statue, dome, and clock tower were replaced with replicas in December 1999, returning the Courthouse to near its original beauty.  The Courthouse is on the National Register of Historic Buildings and on the State Archeological Site Register. A statue of Peter Hansborough Bell, the Governor who created Bell County and its namesake, stands on the Southwest corner of the Courthouse square.  Governor Bell was a San Jacinto veteran, Mexican War veteran, Texas Ranger, Governor, Congressional Representative, and later a Colonel in the Confederacy.  The county seat, previously named Nolandsville, was changed to Belton due to a postal problem and is most likely a contraction of Bell and town.


Click here to send us your itinerary and we'll provide recommendations! Back

Enter the email you signed up with and we'll send you password reset instructions.